SICILY: A Delicious Slice of Life!

Come discover the famed beauty of Sicily’s Ionian Coast! On this 10-day getaway to the eastern coast of Sicily you’ll tour archaeological sites dating to the 8th century BC, ornate baroque villages, a city built of lava, and the enchanting seaside resort of Taormina. You’ll explore Mount Etna by jeep and sample products grown in the volcanic soil of its slopes. Dine at some of Sicily’s finest restaurants, visit local markets, learn Sicilian cooking, and enjoy a wine-tasting at one of Sicily’s best wineries.  This is an active vacation offering a blend of culture, archaeology, art, history, and cuisine.

Dates: September 17-26, 2023  Email us to be notified of tour details.
Early Booking Discount Price : $4559  per person double occupancy*
*For reservations received by 16 March 2023, after this date add $150 pp
Single Supplement: $1475
Solo Travelers: Opt to share and pay no single supplement.
Upgrade Option to sea view room for 4 nights in Taormina starting at $225 per person sharing/$390 single-subject to availability
Check Kayak.com for great deals on flight to Catania (CTA).

Email us to reserve you spot.

Arrival at Catania–Fontanarossa International Airport (CTA) before 2:30 pm. Transfer to the heart of Catania, a city built of lava, dating back to 729 BCE. Here we find ancient Roman baths and an amphitheater enclosed by a residential area, beautiful baroque architecture, and the famous Fontana dell’Elefant. Relax and enjoy the view of Mount Etna from the rooftop bar/restaurant of our 4-star hotel before gathering in the evening for a welcome dinner of local specialties and wine. (D)

Today we will explore this fascinating city on foot with our local guide.   Learn about the history of the city from ancient times to modern day life in the shadow of Mount Etna. Visit the fish market, churches and the Catania Cathedral dedicated to St Agatha, patron saint of Catania. Today St Agatha is also the patron Saint of breast cancer patients. Enjoy a traditional Sicilian style lunch. (B, L)

After breakfast, transfer by minibus to Ortigia, which is the old section of Syracusa. It was in Ortigia that the ancient Greeks of the 8th century BCE first built a colony from which grew the city of Syracusa.  In Ortygia our hotel is in the center of the ancient city surrounded by baroque palaces, ornate churches, ruins of Greek temples, and just a block from Ortigia’s famed Piazza Doumo. That evening enjoy a sunset cruise for a different view of this city known as the White City. (B, L))

The best way to explore narrow streets of Ortigia is on foot. We’ll begin our day with a visit to the local morning market with colorful produce, fresh fish, and other sights and smells, sampling food along the way. Next we’ll learn to make some of the delicious foods Sicily is known for. You’ll learn the secrets to making traditional Sicilian cuisine; this fun experience culminates at the table, where together, drinking wine, we will enjoy the food and company. Later that afternoon we’ll be joined by our guide for a look at the city’s ancient past. According to the Homeric Hymn to Delian Apollo, Ortigia is where Leto gave birth to the goddess Artemis. After her birth, Artemis assisted her mother across the sea to the island of Delos in Greece, where Leto gave birth to Apollo. Discover ancient Greek temples, one dedicated to Apollo, protruding from the earth in the middle of the old city. Another dedicated to the virgin goddess Artemis is hidden beneath a municipal building. Next to the temple of Artemis, Athena’s temple still stands, but it has been incorporated into a Catholic cathedral honoring the Virgin Mary. Nearby, across the piazza, is the Church of Santa Lucia. It is believed to been built on the site where Syracusa’s virgin patron saint, Santa Lucia, was martyred. (B, L)

Today enjoy an excursion to the unspoiled baroque village of Noto. This beautiful town of the Val di Noto is a UNESCO World Heritage site. Due to its ornate architecture, this town is described as a garden of stone. The churches tell an interesting story of the role of women in the religion of Sicily. We’ll stop at a local restaurant for lunch before touring the Syracusa Archaeological Park with its ancient Greek and Roman structures including a Greek theater that seats 15,000 and the ruins of a Roman amphitheater. (B)

After breakfast, we will bid farewell to Ortigia and travel north to the enchanting seaside town of Taormina. En route we will stop for a wine tasting and lunch at a small family-owned winery with beautiful gardens and a 13th century hunting lodge of Frederick II Emperor of the Holy Roman Empire. Arrive in Taormina and enjoy a welcome refreshments at the hotel’s poolside with beautiful vistas of the Ionian Riviera and majestic Mount Etna in the distance. That evening we’ll explore the fascinating history of Taormina on a walking tour with our local guide. Visit the ancient Greek theater built in the 7th century BCE, discover the city’s Arabic history, beautiful medieval architecture, and visit the garden of the pioneering conservationist, Florence Trevelyan. Learn about H. D. Lawrence’s self-imposed exile to this seaside paradise where he wrote his controversial novel “Lady Chatterley’s Lover.” (B, L)

Experience Mount Etna on a full day 4×4 Jeep Safari with our local expert. Etna is the highest volcano in Europe, towering 10,922 feet above sea level. As we walk on lava flows and in lava tunnels, and on extinct craters, you’ll learn of the region’s volcanic history and mythology. Pass through charming villages with vineyards on the volcano’s slopes, stopping at a winery for a wine tasting and a lunch of local delicacies made of produce grown in the rich volcanic soil. This will be a fascinating and fun day! (B, L)

Enjoy an optional walk/hike (or drive) to the village of Castlemola with breathtaking 360-degree views of Mount Etna, Taormina, the bay of Giardini Naxos, and Strait of Messina. This charming medieval village sits perched upon a hill overlooking Taormina, but is rarely visited by other than Sicilians. Here you can explore picturesque narrow alleys with cafes, restaurants, and shops with local art and crafts. (B)

Enjoy a day to reflect, explore, or visit the famous beaches of Taormina or partake in optional activities. In the evening, we’ll have our farewell dinner at one of Taormina’s best restaurants, owned by two talented sisters,  known for gourmet versions of seasonal specialties and a lovely selection of Sicilian wines which they pair with the food. (B, D)

Morning transfer to Catania–Fontanarossa International Airport (CTA) in time for international flights departing at 10:20 am or later. Private transfers can be arranged for other times for an additional cost. 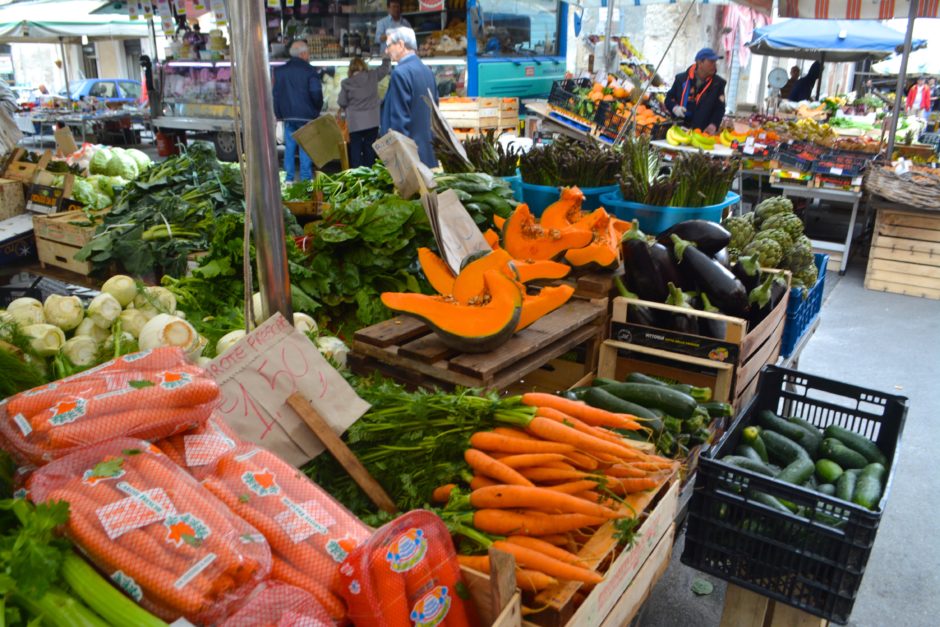 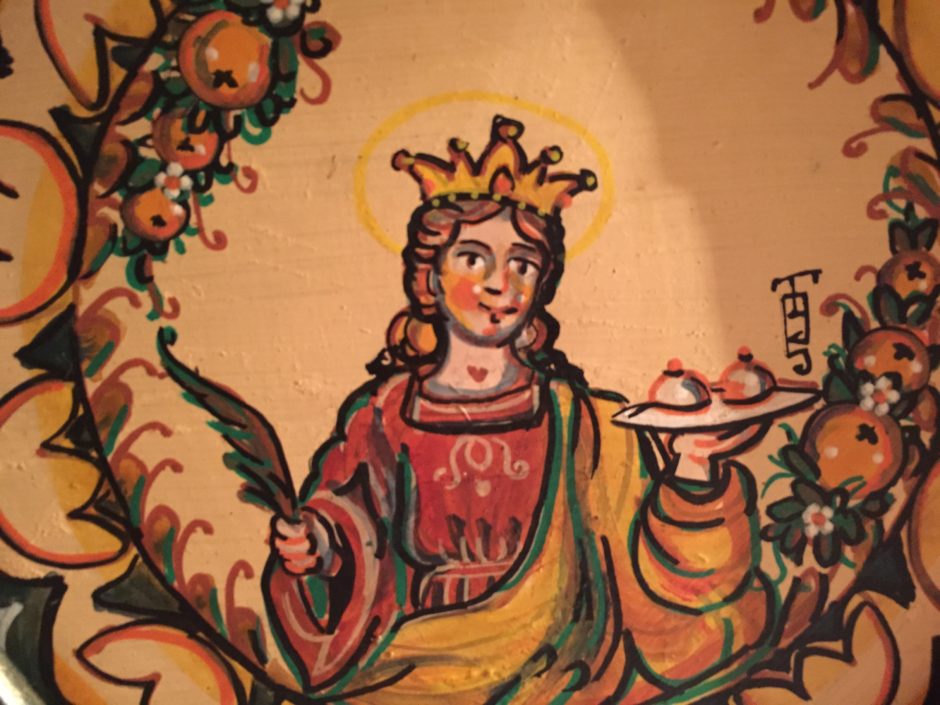 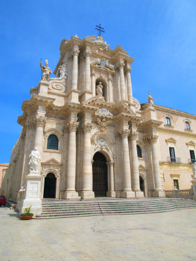 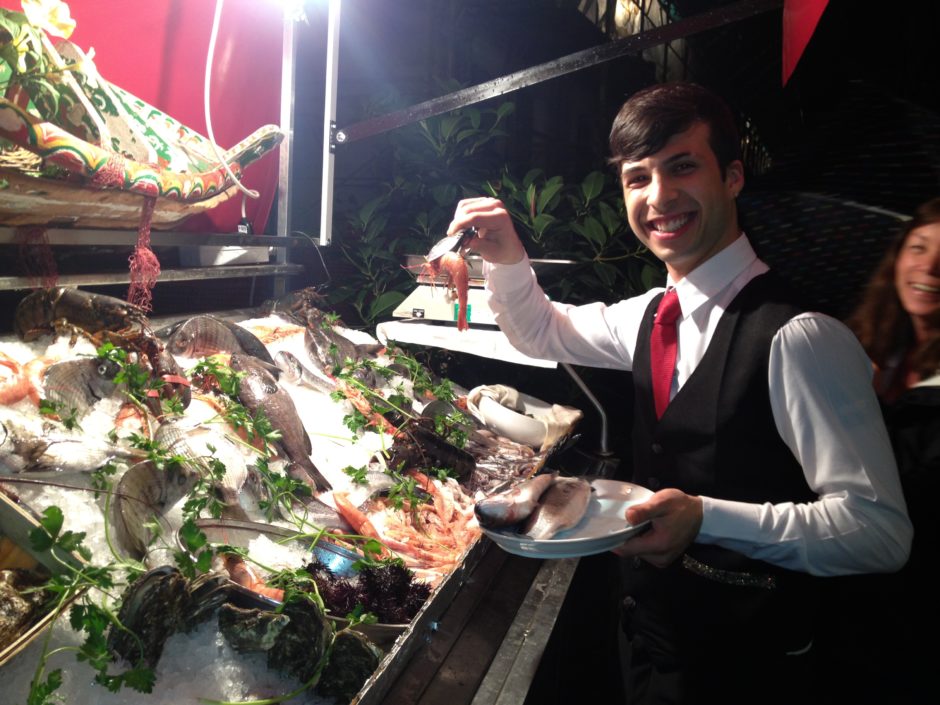 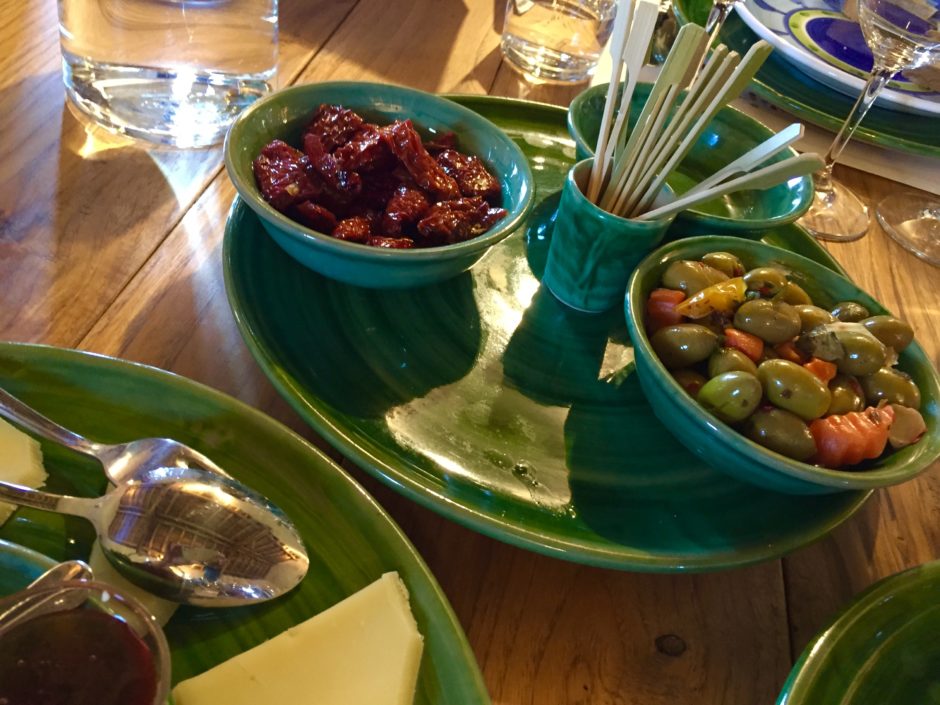 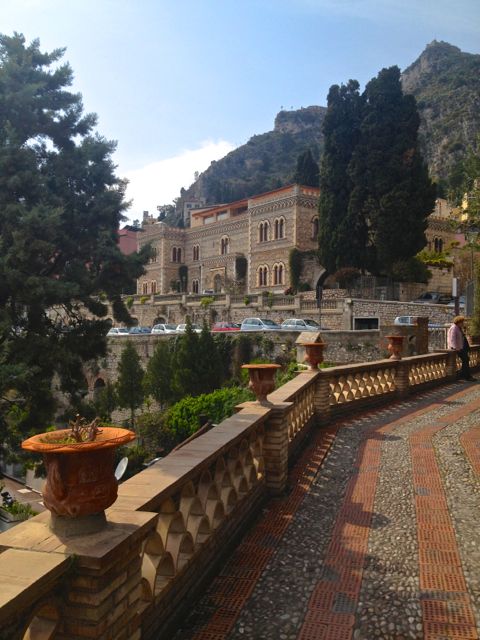 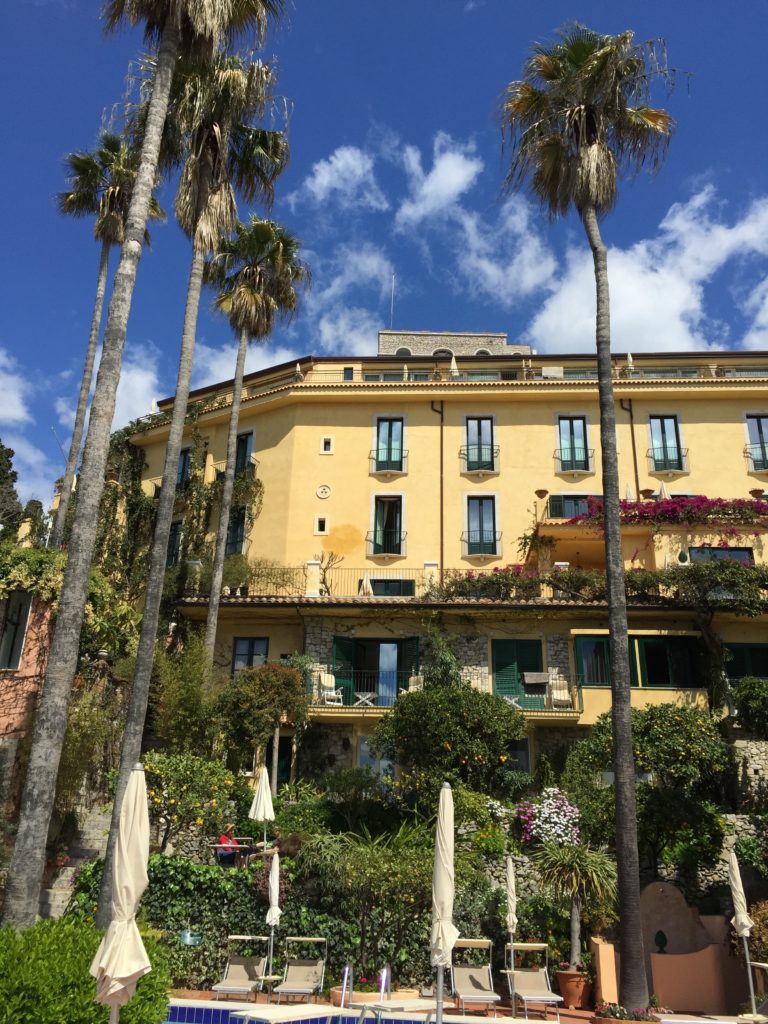 Sicily is the largest island in the Mediterranean and only 1.9 miles from mainland Italy at the straights of Messina.  Although a part of Italy, it is a world of its own.    This fertile island has been a crossroads of civilizations since the 8th century BC when the Greeks arrived to be followed the Phoenicians, Romans, Arabs, Normans, and others.  Thus making Sicily rich in archaeology, architecture, culture and history, and culinary delights; an island to be savored.  Unlike many other destinations in the world, Sicily is not over run by tourism.  You will not find crowds and long lines, but rather a laid back atmosphere, impressive architecture, ancient Greek ruins, wonderful food and natural beauty.

The weather in Sicily during the month of September is cooler than during the hot summers. Average temperatures range from lows in the mid-60s F to highs in the upper 70s F with mostly sunny skies.

The tour price includes privately guided tours with official tourist board guides as per itinerary. Also included are all admission fees to included sites and meals as per itinerary. Our women-only travel groups are NOT motor coach tours, although we use minibuses for locally guided tours that are included in our itineraries. Transfers are by air-conditioned minibus or jeep. Guided tours of the major attractions are included as well as some of the lesser known treasures of Sicily. The best way to experience Sicily’s baroque towns, ancient archaeological sites, local markets, and Mount Etna is on foot – so bring comfortable walking shoes. The pace of the itinerary is leisurely with ample time for relaxing or for exploring more. The tour group size is limited to approximately 10 travelers. A knowledgeable WanderWoman® tour organizer will accompany the group to ensure you a stress-free vacation. So whether you are a first-time traveler or a seasoned veteran we invite you to join us on our adventure to Sicily.

The group will meet at Catania–Fontanarossa Airport (CTA), just a couple of miles from the city center, and transfer as a group to our hotel. Although airfare is NOT included we will gladly help with making your flight arrangements. Also we can assist you with any pre or post tour arrangements in Sicily and beyond. ITA (formerly Alitalia), Lufthansa, offer flights to Catania, Sicily. If flying ITA you may want to consider staying a couple of nights in Rome.

We avoid the typical large group tour-oriented hotels and stay at upscale smaller historic properties and smaller local-style inns with local ambiance.  In Taormina we have a limited number of upgrades to sea view rooms with Juliet balconies or terraces. The hotels are within walking distance to restaurants, shops, and points of interest – giving you freedom to explore right out the door!  All the rooms have private baths, direct dial telephones, and TVs.

TOUR PRICE: $4559
Email us to check availability
Price is per person based on double occupancy for reservations received by 16 March, 2023, after this date add $150 per person
Single supplement: $1475.00
Optional upgrade to sea view room for 4 nights in Taormina for  twin is $225 per person and single is $390.
Upgrade to sea view room with personal sun terrance for 4 nights is $370 per person sharing and $689 for single.
Pre-tour additional nights : $175 pp sharing and $352 single including breakfast, taxes and transfer from airport. Subject to availability
We may be able to arrange for a triple room if three are traveling together

Price includes: Accommodations, local transfers by minibus/taxi/shuttle service. Also includes breakfast daily, 2 dinner including welcome and farewell dinners, and 6 lunches including 2 wine-tastings. Dinner drinks and alcoholic beverages are not included unless specified above. Guided tours as above, admissions fees as per itinerary, gratuities for drivers, suggested activities, restaurant recommendations, and services of WanderWoman® tour director to attend to details.

To reserve your space call or email Eurynome Journeys for an application form and terms and conditions. Once you confirm you plan to join the tour, we will hold your space for up to TWO week at which time a $1000 deposit per person is due. If your deposit and paperwork is not receive within 2 weeks, your reservation will be canceled.  Within 90 days of departure, payment in full is due. Travel insurance should be purchased within 14 days of your first payment.
NOTE: To avoid disappointment, early booking is recommended.
Please email us if you would like to join us.

For a free quote from TRAVEL GUARD insurance click here.
Travel insurance should be purchased as soon as you pay your non-refundable deposit.

NOTE: This is an active vacation involving walking and climbing stairs and thus requires a certain degree of physical fitness. This tour is NOT suitable for those with limited mobility. All group activities are NON-SMOKING. Eurynome Journeys and its representatives reserve the right to change the itinerary and make substitutions as necessitated by local circumstances and/or deemed necessary by the tour leader to ensure the safety and comfort of the tour participants.

Celebrating 20 plus Years of Specialty Tours & Women’s Travel Vacations and Retreats to Europe, U.S. & Beyond!