Donate to the Ukrainian Women’s Fund, which is helping women and girls in this wartime crisis with humanitarian aid, shelter, transportation and other needed support.

For updates on the current situation in Russia, visit the US Embassy in Russia website.

Tour Russia in grand style! Explore Russia’s rich art, history, and culture. Discover the epic role of women in creating the grandeur of the Russian Empire.  We begin in our journey in Moscow the capital of Russia. We’ll tour the Kremlin, Red Square, and St Basils Cathedral.  Next to the Golden Ring of Russia to discover the  beauty of countryside villages and towns, dating back to medieval times, with magnificent onion domed monasteries and charming wooden churches. Travel by train to St Petersburg. Visit the opulent summer palaces of Russian royalty. Enjoy a special, privately guided, pre-opening hours tour of the amazing Hermitage Museum, which was created by Catherine the Great as her own personal haven.

This tour makes for a wonderful mother/daughter getaway!
Email or call 207.236.0110 to be notified once we start accepting reservations.

Day 1: Our grand tour of Russia begins in Moscow.  After an opportunity to rest and freshen up, we will walk to a nearby restaurant for a welcome dinner Russian-style and an opportunity to get acquainted with fellow travelers. (D)

Day 2: We begin our exploration of Russian history and the lives of the women influential in the shaping of Russia with a privately guided walking tour of the Kremlin, the former residence of the tsars, now the seat of the Russian president. Visit the Kremlin Cathedrals, which date to the 15th century and served as the coronation, wedding, and burial places of early Russia royalty. Tour the Kremlin Armory, treasury of the tsars. View priceless artifacts and royal regalia including ceremonial robes, the wedding dresses of Catherine I and Catherine the Great, royal jewelry, icons, a unique collection of carriages, and Faberge eggs.

Enjoy lunch at a local restaurant. Next stroll across the famous Red Square and visit St Basil Cathedral – a landmark of the capital with bright onion-shaped cupolas.  Return to our hotel via Moscow’s Metro with its lavishly designed stations adorned with marble, mosaics, sculptures, and chandeliers. (B, L)

Day 3: Enjoy a full-day panoramic city tour including Christ Cathedral and Novodevichy Convent. Novodevichy Convent was originally founded in 1524 to serve as a monastery and as a fortress.  Later it become a refuge for noble Russian ladies.  The convent also provided a convenient depository for unwanted female royalty, including Feodor I’s wife, Irina Godunov; Peter the Great’s half-sister, Sophia Aleksevevna; and his first wife, Eudoxia Lopukhina and others.

After lunch, tour the Tretyakov Gallery, home of the world’s largest collection of Russian masterpieces. Here you will see ancient Russian icons and pre-revolutionary art, as well as the works of modern Russian artists including famous Russian female artists such as Lyubov Popova. Followed by shopping at Old Arbat Street or an optional visit to the Pushkin Museum of Fine Art. The treasures of the Pushkin Museum include the famed “Treasure of Priam” of the Trojan War, unearthed by Heinrich Schliemann. Evening at leisure. (B)

Day 4: Travel to Suzdal visiting small picturesque towns of medieval Russia. Visit the center of Russian Orthodoxy – St Trinity Sergius Monastery in Sergiev Posad (Zagorskan).  This beautiful monastery has been an important Russian pilgrimage site for over 500 years. Crowned by iconic gold and blue onion domes, the monastery’s Cathedral of the Assumption is one of the most photographed cathedrals in all of Russia.  Stop for a traditional lunch.

Next, tour the medieval town of Alexandrov, the former seat of Ivan the Terrible. Here at Trinity Cathedral Ivan the Terrible married his third wife, Anna Sobakina and his fifth wife, Anna Vasilchikova.  Continue on to the town of Suzdal, known as the pearl of the Golden Ring.  We will stay at a traditional Russian-style 4-star hotel located within walking distance to attractions and restaurants. (B,L)

Day 5: Enjoy a walking tour of picturesque Suzdal, a rustic Russian village clinging to traditions. Visit the 10th century Kremlin, which as impressive as the Kremlin in Moscow, and Epithimius Monastery. After a break for lunch, visit the open-air Wooden Architecture Museum or enjoy free time for exploring, shopping or an optional Russian Banya (Russian version of a sauna–highly recommended) and treatments. (B)

Day 6: Travel to Moscow via Vladimir. Discover Vladimir’s rich history through its impressive monuments, including its Golden Gates and magnificent cathedrals.  The Cathedral of the Assumption, a World Heritage UNESCO site, is known for its beautiful frescoes and majolica tiles. The Dimitri Cathedral, with its reliefs carved on its façade, frescoes, and mosaics is one of the most extraordinary cathedrals in Russia. Travel to Moscow in time for the fast-train to St Petersburg, dining aboard (3.5 hours).

St Petersburg, Capital city of the Peter the Great & Catherine the Great: 5 nights

Late arrival in St Petersburg with transfer to our 4-star hotel located in the city center.   (B, L)

Day 7: After a leisurely morning, enjoy a panoramic city tour with a visit to the Peter and Paul Fortress & Cathedral – the sepulcher of all Russian emperors. See the Grand Choral Synagogue and learn about history of the Russian Jews. Tour the Yusupov Palace including the room in which Rasputin was killed.  Time to relax before walking to dinner and a Russian caviar & vodka tasting. (B, D)

Day 8: Tour Catherine’s Palace with its famed Amber Room in Pushkin. This magnificent imperial palace is located just south of the city and was was Catherine the Great’s favorite summer residence. But it was Catherine the 1st, the wife of Peter the Great for whom the palace is named. The original manor house, which was transformed into an imperial summer palace, was a gift from Peter the Great to his empress.  The estate became the country residence of Russian emperors who followed.  The palace is one of the finest examples of Russian baroque architecture and interior design of the18th century.  A must see.

After stopping for lunch, tour Pavlovsk, Paul’s Palace.  Catherine the Great loved the nature in the Pavlovskoye area and visited it frequently for hunting outings. The estate here was a gift from Catherine the Great to her son Paul the 1st and his wife Maria Feodorovna, in celebration of the birth of their first son in 1777. After the murder of Paul in 1801, Pavlovsk became the primary residence of his widow. Today, like other Russian imperial palaces, Pavlovsk is a museum. (B, L)

Day 9: Travel by hydrofoil across the Gulf of Finland to the Peterhof summer palace, one of the most beautiful palaces and palace grounds in the world. This world-famous palace, fountain, and park ensemble is an outstanding landmark of Russian artistic culture of the 18th-19th centuries. Founded in the early part of the 18th century by Peter the Great, Peterhoff was intended to become the most splendid official royal summer residence. The Great Cascade with its gold gilded statuary and fountains creates an atmosphere of majesty and celebration.  Stop for a quick lunch and return to our hotel with time to rest before dinner. (B, L)

Day 10: Our last full day in Russia will begin with a pre-opening hours private tour of the Hermitage Museum with our local expert.  The Hermitage housed Catherine of Great’s personal art collection, which she valued dearly. Motivated by the ideals of the Enlightenment, Catherine brought to Russia a new focus on arts, architecture, and sciences; and thereby transforming St Petersburg into a grand European city.

After our tour of the Hermitage, enjoy free time to further explore the museum’s vast collection of treasures or meander about this lovely city. After lunch on your own, enjoy a guided tour of the Church on Spilt Blood, St Petersburg’s most photographed Church with colorful surreal-looking onion domes. With our guide we will visit the Kuznechny open-air market returning to our hotel by Metro. This evening gather for a special farewell dinner at one of St Petersburg’s premier restaurants. (B, D)

Day 11: After breakfast, transfer to St Petersburg’s Pulkovo Airport (LED).   We will coordinate our transfer based on everyone’s flight times.  (B)

NOTE: Eurynome Journeys, LLC and its representatives reserve the right to make changes the itinerary as necessitated by local circumstances including changes in ferry/flight schedules, weather, and/or for any reason as deemed necessary by the tour director. 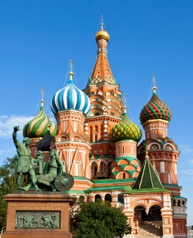 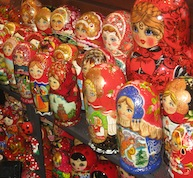 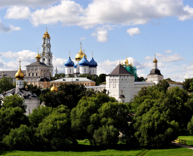 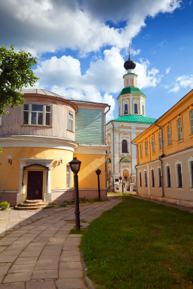 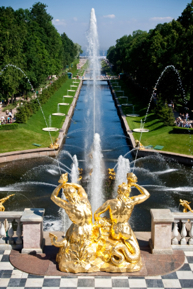 The Grand Cascade at Peterhof 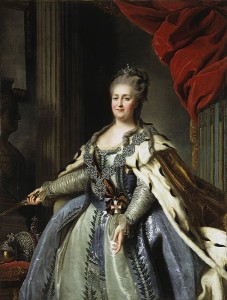 Catherine the Great of Russia

This is an upscale tour (the best way to experience Russia) timed so you can experience the famed White Nights of Russia.  Accommodations are in lovely 4-and 5-star Russian-style properties located in walking distance to sights, so where convenient we will tour on foot and use the ornate metro systems in Moscow and St Petersburg to return to our hotel. The tour is limited to 6-10 women. Although, some of our touring will be done by coach or minibus, this itinerary involves walking for a more intimate look at Russia.  Most of the walking is easy, ranging from 1 to 4 hours, but the terrain can be uneven due to cobblestone streets and some climbing of stairs is required. This trip is NOT suitable for those with limited mobility.  A certain degree of physical fitness is required. All group meals and group activities are smoke-free.

VISA FOR TRAVEL TO RUSSIA:

Due to the pandemic visa processing has been suspended for the time being.  Check with us for updates.
Travel to Russia requires obtaining a visa-so please book early so that you have ample time to obtain a visa.  Approximately 30-60 days prior to our tour date, we will arrange a Visa Support Letter (VSL) for you, which you will need for obtaining your visa from your Russian Consulate.

US citizens: Visit the Embassy of Russia to the US website for visa requirements for US citizens traveling to Russia.

Canadian Citizens: Visit the Embassy of Russia in Canada website for visa requirements for Canadian citizens traveling to Russia.

Travelers from other countries, please check with the Russian Embassy or Consulate in your country.

We will provide travelers with assistance and all necessary paperwork from Russia for the visa application process.

The tour price is per person based on double occupancy for reservations. This is a great trip for a mother/daughter vacation!

Upgrade supplement for superior room in Moscow and room with view of St Issac’s Cathedral in St Petersburg: Available upon request (subject to availability)

Extra night in Moscow or St Petersburg: Available upon request

Transfers to and from hotels, domestic ferries, sightseeing by coach or minibus, and train as per itinerary including taxes

Tour director escort for duration of trip to attend to details so you can relax and enjoy the journey!

Airfare to and from Russia, visa & passport fees, meals, soft drinks, and alcoholic beverages not specified above, personal expenses such as laundry, telephone calls, faxes, email services, room service or items consumed from room refrigerators, optional activities and tips for chamber maids/ guides/drivers/tour escorts. An additional admission fee applies to the Treasure Gallery at the Hermitage Museum and the State Diamond Fund in the Kremilin.

To reserve your space, fill out the Application Form, read and sign the Terms and Conditions, the Release Form and send along with a photocopy of your current passport and deposit check for $1000.00 per person; add $100 per person for post-tour option.

The purchase of travel insurance is strongly recommended. For best coverage options insurance should be purchased within 14 days of you tour deposit.

This is an active vacation involving walking and climbing stairs and thus requires a certain degree of physical fitness. This tour is NOT suitable for those with limited mobility. All group activities are NON-SMOKING.

1998-2018 Celebrating 20 Years of Specialty Tours & Women’s Travel Vacations and Retreats to Europe, US & Beyond!